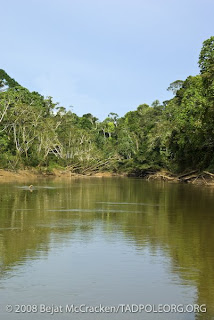 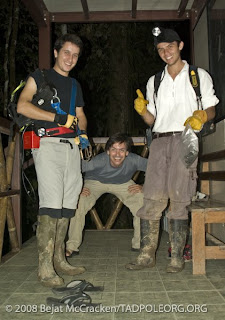 Alfredo (in the photo to the left with Kenny and Shawn) spent his final weeks here at TBS looking for the elusive Emerald Tree Boa in his spare time. He spent every evening out in the forest searching, but to his dismay he did not find any Boa. After all this time searching at the Catolica Station and here at TBS, it can lead one to believe that it is illusive rather than elusive. That is how it is though, no guarantees. That’s what makes it both challenging and that much more exhilarating when, whatever your elusive may be, is encountered. He did find many other snakes and had incredible sightings. Alfredo left about 2 weeks ago and is traveling around Ecuador before he returns to his home in Puebla, Mexico. 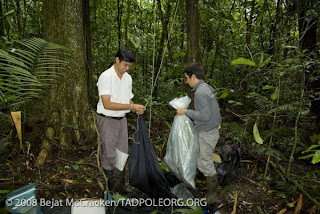 d from the US. He is from Maine, a recent graduate of Carleton College in Minnesota. Kenny has recently graduated from Eckerd College in St. Petersburg, Florida, but grew up in Sebastian. Both assistants are brilliant, striving for excellence, yet starkly different in character. 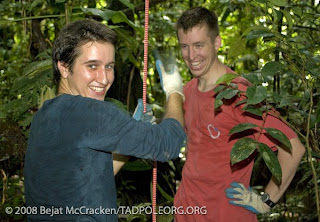 hing us more about Entomology daily. Colin has only just arrived, so it’s hard to say exactly where his true interests lie, but he seems to love it all with incredible enthusiasm.

Life in the forest is different from life in the city. Seclusion and isolation are one in the same as you find yourself alone in the forest day in and day out. Sometimes researchers become hermits, unusually unsocial. There hair becomes long and wild, they grow beards if they are men and body hair becomes naturally long if they are females while their bodies become more and more emaciated. Running through the forest in the heat keeps the body fit, yet in time the mind looses it’s western world tuning. Upon 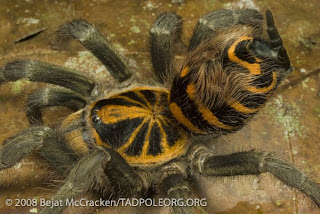 Shawn climbed his final tree to extract bromeliads here at TBS (refer to photo on the right side). He climbed a total of four more trees during our brief reprieve and on Monday, November 10th, we will return to the Catolica Station (YSS) to climb four more trees. We will be rushed to climb these trees since Shawn has a presentation at the University of San Francisco de Quito, located in the suburbs of Quito, at the end of November.

Kenny and Colin are surveying the Puma plot once more, correcting points and taking heights of trees with the Nikon Laser Range Finder. Every other day they are in th 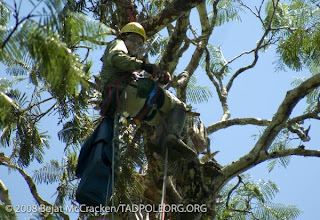 e lab, sorting insects to order, which will be sent to Terry Erwin at the Smithsonian when we return to the States. Remarkably they only have 10 more trees to sort. They have been working diligently and may have all the insects sorted before we leave Ecuador. In the evenings they have been doing transects on the canopy walkway and we have been working the trails looking for new species. We have found several species that have not been found here before, as well as several we have never found here in the past. This is great news and I now have more photographs for the TADPOLE publication of Yasuni Herpetofauna color plates, book and web 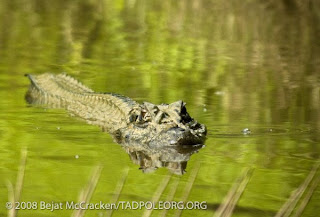 Shawn has been working day and night on his DIGG grant proposal, Doctoral Improvement Grant, so that we can return next year to finish the 3rd field site where he will climb 18 more trees. I will be continuing the work for TADPOLE and working as Shawn’s primary research assistant, so I will need to generate funds to continue the efforts of TADPOLE. My efforts will be through my paintings, photographic work and fundraising.

I have also been practicing and climbing several trees in preparation to climb one of the next trees to video and photograph Shawn while working in the tree. It will be nice to get a better vantage point than from what I always get on the ground. As long as 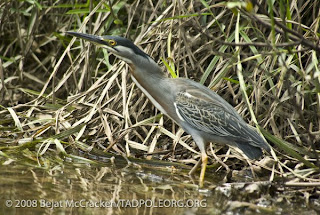 Shawn is able to find a crouch to work in while strapped to his lanyard, he can get off the rope and I can then climb up and capture his work.

Since things have slowed down over the past several days I have been traipsing around the forest videoing and photographing. I have spent many days at the lake rowing around in a dugout canoe to find the enormous Black Caiman, Spectacled Caiman, Sungrebe, Great Potoo, Hoatzins, Pitche, Tanagers, Cocoi Heron, Striated Heron (pic to right) and the list is infinite. Tracking the Black Caiman (depicted in photo on upper left side) around the lake is energizing. The lake is simply spectacular.

Went out netting bats at a luscious clay lick on the Yasuni side of the Rio Tiputini. Located about 15 minutes down stream fro 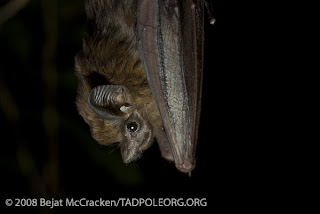 m the station and about 1 1/2 kilometers into the park, it was laden with animal and Waorani hunting trails all leading to this one location. It was GREAT! WOW! We caught 48 bats! I must have taken out about 15 or possibly even more by myself. It was so amazing. They are gorgeous. There were small ones, big ones and monstrous ones. I got bit by one of the small leafed-nose fruit bats and my finger is still throbbing, but it was well worth it. I have my rabies shot, so all is well, but hot damn it hurts. That little guy bit clear through to the other side of my index finger on my left hand. He did this chomp, grip and rip technique similar to a dog playing tug-o-war. He was thrashing his little head back and forth, making the most of his efforts and doing a fair amount of damage that was quite painful. Ouch! All I could do was be patient and calmly try to pry his little jaw apart. What a little macho. Bats are so full of character with faces like angels, devils, dogs, cats and other indescribable creatures. The services they provide to this forest are remarkable. The evening ended about 11pm and we hiked back out to the river and saw a large red brocket deer. What a stellar night. 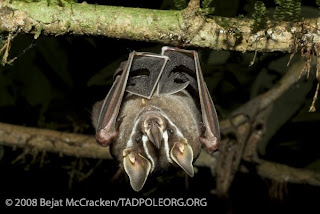 The rainforest is a mystery and the story unfolds daily before my own eyes. Take a seat anywhere in the forest and you will find the secret bounty of life. Amazingly enough the observations become clearer in minute detail. If the eye of the beholder is where the beauty lies, then my eyes must be rose tinted because everything is beautiful here.
Posted by Shawn/Bejat at 9:58 AM