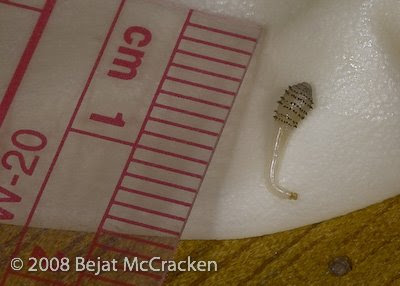 Over the last several days we have been very busy. Shawn climbed a tree about 1,500 meters from camp down the Guacamayo trail, which we call the Guacamole trail for its muddiness when it rains heavily. The climb was successful with just some slight rain and a few bag tears. The walk back with the five bagged bromeliads and gear is always a bit taxing, but rewarding once we find what's inside. FROGS! Yes this time there was one Eleutherodactylus aureolineatus and six Eleutherodactylus waoranii. All the male frogs were calling in the bags that night and we were so excited to hear E. waoranii calling in the bag. Shawn got an amazing recording, most likely the only one in existence.

I had a botfly grow within the middle of my forehead. A botfly is this insect that develops under the skin of mammals by dissolving their flesh as it develops. Once it pupates it burst out as a fly. It has tiny spiricules to hold itself in place that poke into your flesh and irate the hell out of you. Then he pops out this breathing tube above the skin so he can get a breath of fresh air. When he does this puss spews out of the hole. It’s just absolutely disgusting and annoying. At least he keeps the area from getting infected by producing an antibiotic that protects, not only him, but the area of the host’s body that he’s living in. However, the rest of the host’s body is fair game and usually has a reaction when it is in sensitive areas like the face, as was mine.

I had the right side of my face and lymph nodes swell and become infected. It was rough because I had to allow the little bastard to develop. When puss was running down my forehead and dripping off my nose, I knew it was time for him to die. I felt like a science experiment, everyone wanted to get a good look with their eyepieces at the little critter throwing out his minuscule breathing tube every so often. Like the stars on Broadway he was flooded with lights so he could even be seen. So, after several weeks we covered him with duct tape for about 12 hours to suffocate him. The next morning Charne gave him a good squeeze, just like popping an enormous zit, and out he came, breathing tube and all. My little bastard child was 1 cm long and I've named him Bastard I. He now resides in 70% alcohol, preserved for all eternity.
Posted by Shawn/Bejat at 8:19 PM