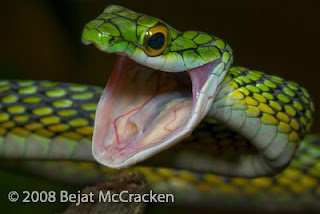 Posted by Bejat
Well, it’s the dawn of a new day and it’s been raining all night long. It appears as if it may rain all day too. It’s a great day to get our lab work done and for me to paint. Yesterday I attempted to paint Disocactus sp. to no avail. It did not get sunny enough in the morning, which was my opportunity to work. So, I suppose I will be painting from my photograph since this rain will surely destroy the bloom.

Shawn, Charne and Noah surveyed the rest of the trails for bromeliads so Shawn can do his random number thing and then we get to climb for bromeliads. I finished up processing the frogs in the lab by photographing their dorsal, ventral and lateral for identification purposes.

At 4 pm I left with Jaime, Maricela and his student group from BU to net for bats along the river at the clay lick. I took some amazing photos of many different species of bats. I even got to untangle 3 bats out of the net, wow, what an experience. I do have my rabies 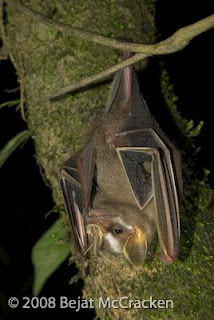 shot and was wearing gloves for protection. Their teeth are razor sharp and they just gnaw at whatever they can get their mouths on either out of fear, frustration, protection or all of the above. We did not catch the fishing bats like I had hoped, but we caught somewhere around 42 bats and I believe 5-7 different species. So, that more than made up for it! The photograph you see at the right is one of the leaf-nosed bats we caught.

The nets were set up in an open clay lick and the mud was thick and heavy, almost like sinking in quicksand. I did manage to fall on my butt and even got mud down in my underwear, now that was fun for the rest of the evening (about 3 hours). I did save my camera and the bat. We caught two little birds early on and I got to see Jaime untangle them from the net. He is so fast. I was kinda hoping we would net a Tapir, but the students were way too loud for us to see, hear or net any large mammal. Upon arrival to the clay lick, which was upstream from the station on the North side of the river, I found some Waorani bare footprints in the mud that appeared to be tracking a large Tapir into the jungle. The indigenous hunting continues to get closer and closer to TBS.

In the past I’ve heard shotguns go off near the black water tributary on the edge of the property and other researchers have found bullets, footprints and markings on trees. Since they and the Quichua have over hunted their land all around the Via Maxxis road, the Waorani are taking boats further up and down the Tiputini to hunt. Shawn caught 3 snakes today. One of them, a little vine snake we found on the way to our cabin after I said “you better bring those snake tongs with you snake boy.” He didn’t, so of course we found a snake. He is non-venomous so Shawn scooped him up and took him back to the lab.

Today we will process all the snakes by taking specimen shots (scientific photos), glamour shots (pretty photos with natural backgrounds), measurements, weight, blood, and key them out (identification). The photograph you see in the upper left right corner is a Parrot snake, Leptophis ahaetella nigromarginatus in defensive gaping position. Noah and Charne will be doing some of my dirty work today like washing bags, labeling specimen tubes, assisting with processing snakes and collecting rainwater. I think Shawn will also have them study amphibian identification and calls, as well as enter data.

Well, the day has just begun and I am need to go through my photos and label them, label my videos and complete some painting before lunch. It may be one of those 24 hour rains where I am able to get caught up on everything.
Posted by Shawn/Bejat at 10:03 PM