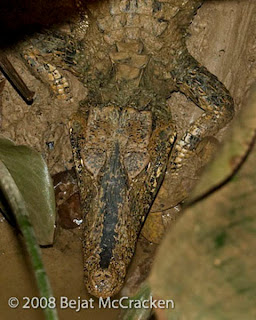 The evening was a completely spectacular out on the Rio Tiputini. We saw all three species of caimen and even one that had been released by the station, a very large black caiman. Kelly Swing, the director of the station, said this individual was about 7 feet long and about 6 years old. I was in awe. We must have seen about 9 individuals in total. I got some amazing photos and video too. I feel so fortunate to have witnessed such a spectacular sighting, especially on such a brightly lit night. The moon was so bright and the sky was so clear. We could see every star in the sky and even the Southern Cross. It was my first time to see this constellation that sits very low on the horizon. We usually do not see it because of its proximity to the horizon and the trees. The Southern Cross is one of those constellations that can only be seen in the Southern Hemisphere.

I am sad to say that Lucha has flown the coop. Lucha was the pet Trumpeter that was a gift by the Waorani to the other Director of the station, David Romo. She began acting more like a wild bird than a pet by not attending meals to be feed, not begging to be pet and roosting in trees rather than the workers housing. She seemed to be breathing heavily and groups of Trumpeters had been coming through and near camp for many months. These groups seemed to be enticing her to leave. One day she was here and the next day gone. We believe her biological clock was ticking and she felt the need to pro-create. She left about 3 weeks ago and we we all hope she is happy as a free bird. Although, she was always free to do and go wherever she wanted. She just acted scared to do so.

This past week I went to Quito to run errands and pickup supplies. I seem to be rather good at it and got the list from hell accomplished in three days. We also met with Jorge and Martin from Finding Species and discussed our grant proposal for NSF that is due July 9th. Not much time to prepare, but hopefully Shawn has become so proficient that he should not have a problem getting something together so that Margo, also from Finding Species, can officially write the grant. Finding Species is a non-profit organization that the TADPOLE organization has been collaborating with over the years. Photos I have taken over the years in the Ecuadorian Amazon and more information can be viewed on their website at www.findingspecies.org.

Today was stellar, besides babysitting the GPS and preparing to pack up and leave. I headed out to the Salt Lick to prepare for my next Tapir sitting. I did not make it there, for I was distracted by the monkeys. At the intersection of the Matapalo and Harpia trails their was three species of monkeys. I saw Woolly, Howler and Spider monkeys. It was very difficult to decide which group to follow and I found myself running circles at times. After the first few laps I decided on the Howler monkeys and stuck with them for about 1 hour. The sky was bright blue and the lighting was perfect. I will be excited to see what my video footage looks like.

Another day and night in this amazing place makes me feel the time slipping through my fingers and the moments are passing more rapidly. It is like opening a rare vintage bottle of wine, after one glass you fear there is only a few more left and you savor every last sip. Those last few sips become intensely gratifying, yet inexplicably intense. I am getting to my last few sips here at TBS and I just want to swirl it around in ecstasy.